Introduction to Programming with Clojure

If you’ve never programmed before, you may not know that there are many languages to choose from. Some of the other languages you might have heard of (or will hear of!) are C, JavaScript, Python, and Java.

So why are we teaching Clojure? Although it’s not as popular as any of those languages, we’re using Clojure because of three qualities it has that make it an ideal first language to learn–or a great language to learn in addition to others you might already know:

Clojure is simple. That’s not to say it’s not powerful; it is. The number of concepts you have to know to program in Clojure is very small, however, and easy to grasp. Clojure grows with you as you learn it, and you can be very productive with a small subset of the language.

Clojure is all-purpose. Some languages have a specific focus. JavaScript, for example, was traditionally used only in web pages (although that’s changed somewhat). Objective-C is used mainly for iPhone apps. We’re going to make a drawing application today, but you can use Clojure for any sort of application easily.

Clojure is fun. That’s a matter of opinion, of course, but we think it holds true. I hope that during this course you experience the joy of seeing a Clojure program come together and do something powerful and surprising.

What is Clojure good at?

So, we said Clojure is all-purpose, and it is. That doesn’t mean it doesn’t have strong suits, though.

Clojure is known for being good at data processing. That’s because it has a good set of data structures–that is, it has several built-in ways to represent data that are easy to use and powerful.

Clojure is known for its concurrency. Think about writing instructions for four of your friends about how to assemble a treehouse, but instead of writing them so one step is done at a time, each of your friends does part of the job. Then, they coordinate at the right time to assemble those parts into bigger parts, and they do this over and over again until the end, when it all comes together. Those instructions would be really complicated and hard to write–and probably hard to read, too. Clojure gives us some easy ways to write these sorts of instructions for computers.

Clojure also works well for building drawing applications with Quil, which is what we’re going to do together.

Next to the parentheses, we see the instructions to the computer. That instruction is normally what we call a function. The functions do all the hard work in Clojure. print-str, + and forward are all functions. When these functions get run, they return some type of value. Clojure functions always return a value.

Many functions take in arguments–which are everything else inside the enclosing parentheses after the function–. print-str takes “Hello, World!” and returns a string. + takes 3 and 4, adds them, and returns 7. forward takes :trinity and 40, moves a turtle by 40 and returns the result.

When we write code, we try to make it as clear as possible. Doing so is a huge advantage because our code gets read by others (oftentimes more so than by us!), or we come back to our own code to read it later, by which point we may have forgotten each exact detail of the code. One way that we can clarify our code is annotating it with comments. Comments are notes that we add to code, for our own sake, that the computer ignores.

In Clojure, comments can be started with a semicolon. Everything after a semicolon until the end of that line is a comment that gets ignored by the computer. Only one semicolon is necessary, but sometimes you see two semicolons in a row, depending on stylistic tastes.

What is a REPL?

“REPL” stands for “Read-Eval-Print-Loop,” which still doesn’t make a ton of sense without context. Many programming languages, including Clojure, have a way to execute code interactively so you get instant feedback. In other words, the code is read, then it is evaluated, then the result is printed, and you begin again–thus, a loop. 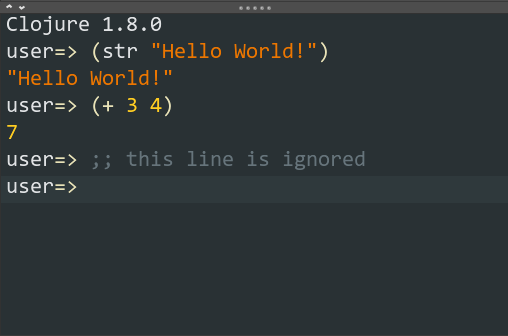 To interact with Clojure, we can use InstaREPL feature of Nightcode. It’s a nice way to play with Clojure interactively.

Nightcode has a project setting aware REPL on a bottom pane. When “Run with REPL” button gets clicked, this REPL starts.

Alternatively, we can start REPL using leiningen on a terminal (without Nightcode). On a terminal, type lein repl, then, REPL starts. If we hit lein repl command within the project directory (folder), it sees the project setting.

Nightcode also lets us evaluate an entire file (program) or line(s). On Nightcode, after REPL has started, “Realod File” and “Reload Selection” works.

Make sure you type the lines exactly as you see them above, taking care to put the parentheses in the right locations.

Return to the first slide, or go to the curriculum outline.